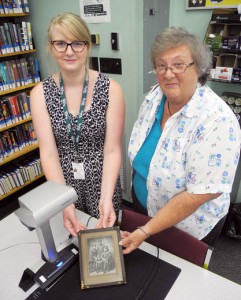 Thanks to the Norfolk County Public Library (NCPL), the Norfolk Remembers Committee has launched a special project to scan original documents, photographs and related material from both WWI and WWII brought in by the public. This material helps tell the story of our ancestors and their connections to events that shaped our modern world. Copies will be digitized and become part of the archives housed in the Canadiana Room at the Simcoe Branch of NCPL. Please consider sharing your war documents and photos with future generations. Help restore a part of our local history, regardless of which country your family originated.

A portable scanner will be used to create a digital record. Your original item will be returned to you immediately.

“A project is underway to record everything, and anything Norfolk County residents have relating to both world wars and post it on a public website.

A three-dimensional scanner has been purchased from the proceeds of a history book about the area’s involvement in the First World War, and the first recordings took place on Monday.

Because it is 3-D, the scanner can make a record of hard items, such as medals and tools, as well as documents. Somebody even brought in a cup from the First World War that would have hung on a soldier’s belt.

“It will help put the picture together of how Norfolk residents served and what kind of life they left behind,” said Heather King, CEO of the Norfolk County Library System, which is helping to organize the job.

The public is being asked to bring in letters, postcards, photos, documents, newspaper clippings, even family stories that have been written down on paper and passed from one generation to the next.

King said the committee running the project felt that with both wars receding into the background, “if we didn’t do something about these items, they’d be lost.”

In many cases, she said, those who served didn’t talk about their experiences, “but it had an impact on our community,” and needs to be preserved.

It was paid for with donations from the Lions Club, which freed up the proceeds from sales to go towards the purchase of a scanner.

Dates have been set for the public to come into library branches throughout the county to have their items scanned.

But library staff are also willing to do home visits, said King.

The scanner was in Delhi last Thursday afternoon where resident Nancy Chartrand brought in a photo of three men in military uniform – three great-uncles including former Simcoe Mayor Percy Carter.

“My grandfather tried to sign up. They told him to go home and grow some legs,” Chartrand, a retired school teacher, joked.

The library system has hired a summer student archivist, Shelby Edwards, to do the scanning.

“It’s important for people who have something to bring it in,” said Edwards, 19. “It keeps a record of the sacrifice people made.”

The committee has also produced another book, this one a collection of letters soldiers wrote home during the First World War, titled “Letters Home, The Beginning, 1914-1915.”

The committee anticipates to follow that with another four or five books of letters.