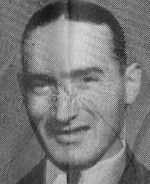 Some confusion as to cause of death. Newspapers indicate he was a POW.

During the Second World War more than 116,000 men and women of the Air Forces of the British Commonwealth gave their lives in service. More than 17,000 of these were members of the Royal Canadian Air Force, or Canadians serving with the Royal Air Force. Approximately one-third of all who died have no known grave. Of these, 20,450 are commemorated by name on the Runnymede Memorial, which is situated at Englefield Green, near Egham, 32 kilometres by road west of London.