Archiving Our Military Heritage – see how you can help with this ongoing research project!

The Norfolk Remembers Committee is currently working on archiving documents, photographs and other related research material on individuals who served in both the First and Second World Wars from Norfolk County.

Part of the NRC’s archives includes a collection of photographs related to the 133rd Norfolk’s Own Battalion from the First World War. Thanks to the work of Fusion Design Group in Markham, Ontario, a panoramic of “C” Company, 133rd Battalion has be digitized with special facial recognition technology that allows you to hover over the photograph to see biographical information on each soldier. Click the picture below to see you yourself!

Click here to view the story behind the faces

The following is an example of the stories the NRC is collecting for the archives: Pte. George Sherlock of St Williams died on Feb 28, 1919 from effects of gassing. He left behind twin sons named Eric and Allan. They were much more than just a legacy. 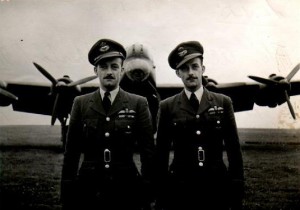 Prior to WWII, The boys ran a fish shop in Delhi, next to Caffery’s Hardware. They were forever playing pranks. One time they set all the alarm clocks in the hardware store to go off at different times. Both were pilots flying for Bomber Command and both received the Distinguished Flying Cross. Allan went on to be the aide de camp for the Governor General.

SHERLOCK, F/O Allan Arthur (J15488) – Distinguished Flying Cross – No.424 Squadron – Award effective 11 April 1944 as per London Gazette dated 21 April 1944 and AFRO 1075/44 dated 19 May 1944. Born 1915 in St.Williams, Ontario; home in Simcoe, Ontario. Served four years with Norfolk Regiment. Trained at No.2 ITS, No.6 EFTS and No.4 SFTS. Commissioned 1942. No citation other than “…completed…many successful operations against the enemy in which [he has] displayed high skill, fortitude and devotion to duty.”

SHERLOCK, F/L Allan Arthur, DFC (J15488) – Bar to Distinguished Flying Cross – No.427 Squadron – Award effective 6 January 1945 as per London Gazette dated 16 January 1945 and AFRO 508/45 dated 23 March 1945. Recommended in October 1944 when he had flown 48 sorties (281 hours 25 minutes). First tour was 10 July 1943 to 5 October 1943 (29 trips, 182 hours 30 minutes) of which all but one were in the Mediterranean (No.331 Wing ?). Second tour was 18 August to 14 October 1944 (19 trips, 98 hours 55 minutes) when recommended. This officer has completed an outstanding operational tour. Since the award of the Distinguished Flying Cross he has completed many sorties against major targets in Germany and enemy occupied territory. He has proved himself a fine pilot and an enthusiastic and resourceful captain of aircraft. Flight Lieutenant Sherlock’s determination, coolness and fearlessness in the face of danger have set an excellent example to his crew.