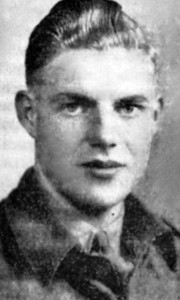 Born 5 Nov 1922 to Charles and Jessie May Adams, of Simcoe. He attended the South Public School and Simcoe High School. At the age of 17 years he enlisted with the first draft called up for the 25th (Norfolk) Field Battery, RCA on June 26, 1940. On June 2 he left Simcoe arriving overseas with a reinforcement unit on Christmas Day of the same year. Some time after his arrival overseas he transferred to the Royal Canadian Horse Artillery. Besides his parents he is survived by three brothers, Ted, David and Thomas and two sisters, Marjorie and Florence, all at home.

On 3 September 1943 the Allied invasion of the Italian mainland began with landing in the south near Reggio and, a few days later, in the Gulf of Salerno. The brigade was attempting to ford the Fortore River on 5-6 October but was driven back by the Germans. The valley was less than 500 yards wide at it’s crossing by Highway 17 which climbed for four twisting miles to Gamatesa, a town of 4,000 inhabitants. By the 8th October the Canadians had captured the north bank and The Princess Louis Regiment entered Colletorto unopposed.

George wrote home in his family in September informing them that he was up in the mountains in Italy after spending several weeks in Sicily. He appeared to be quite cheerful and pleased with his new surroundings and mentioned that he was receiving plenty of cigarettes and candy.

The same day they received George’s letter, the following telegram arrived. “It is with deep regret that I write to you on this occasion. Your son was killed in action, his truck having gone over a land mine, while nobly doing his duty. Gnr Adams was buried with military honours on the same day which he was killed. Many of his comrades and officers attended the service. Our sincerest sympathy is extended to you and your family in this, your time of deep sorrow.”

George is buried in the  Bari, War Cemetery.

He is commemorated on Page 130 of the Second World War Book of Remembrance.