To date, the Norfolk Remembers Committee has published 7 books highlighting the history and personal stories of Norfolk’s soldiers in the Boer War of 1899-1902 and Great War of 1914-1918.  A biographical hardcover history featuring each of Norfolk County’s soldiers who died during the Great War has also been published with a second revised edition.  All proceeds from these books (and those following) go towards publishing costs and special community events to help further the cause of Remembrance.

NEW! Copies of Norfolk Remembers The Second World War are now available for purchase at Norfolk County Library Branches and Museums or by emailing: norfolkremembers@gmail.com 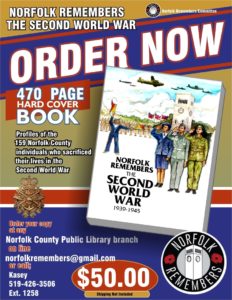 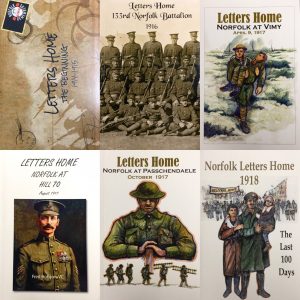 Publications by the Norfolk Remembers Committee 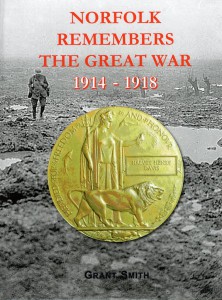 This 410 page hardcover book, dedicated to the men and women who served in the Armed Forces of the British Commonwealth, details the story of 265 from Norfolk who were killed in the Great War. Compiled from years of research, this history presents remarkable insight into the sacrifice made by so many, highlights significant battles, provides biographical information, photos, and much more.

This publication was made possible through the generous and charitable funding provided by the Courtland, Long Point, Simcoe, Simcoe Lynn Valley, St. Williams and Vittoria member clubs of the Norfolk County Lions. The achievement of these Member Clubs in supporting this project stands as a testament to the integrity, energy and commitment Lions bring to serving the people of Norfolk County. They embraced a difficult challenge and turned it into a triumph of charity, dignity and ingenuity. Through their effort the County has a proud and lasting memorial to the Norfolk men and women who served and died in the Great War. ALL proceeds from this book go towards future publishing and special commemorative events. 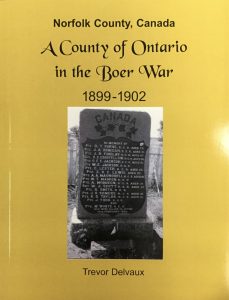 History of Norfolk County in the Boer War

The Boer War was Canada’s first overseas war, fighting as Canadians with Canadian Officers in Canadian units. Want to know more? You can purchase this 144 page softcover book from all Norfolk Libraries and Museums.

All proceeds from this book go towards future publishing and special commemorative events.