On August 10, 2014 Norfolk Remembers the Great War: 1914-1918 was officially launched. A special gathering was held at the Royal Canadian Legion, Branch 79 Simcoe where inscribed copies of the book were presented to Jeanne Hornby, Legion representatives and others who had been of considerable assistance with the project. In the afternoon the public launch was held on the historic grounds of the Simcoe Library where author Grant Smith signed copies. Following speeches, a silent walk to the Norfolk War Memorial – Carillon Tower took place where a service of Remembrance was conducted under the direction of Lt.Col. The Rev. Bryan Robertson, CD, padre of the Simcoe Legion.

The following was published in the August 6, 2014 edition of the Simcoe Reformer by reporter Sarah Doktor

SIMCOE – The 250 names carved onto the Carillon Tower in Simcoe are much more than just names.
The stories of the 250 Norfolk residents who gave their lives to serve Canada in the First World War will come to life in a new book called “Norfolk Remembers, The Great War 1914-1918” by Delhi native Grant Smith.
The book has been an ongoing project for the last eight years. Smith used online resources as well as the archives from the Norfolk Historical Society and the local legions to help compile the life and death stories of the 250 soldiers.
“There were a lot of people involved. The people that helped me on this were absolutely phenomenal,” he said.
The most helpful piece of research was a complete set of newspaper articles from 1914-1919 from local newspapers that were transcribed by Jean Hornby.
“That was the magic part,” said Smith. “That was the most valuable piece. That made them all human again.”
The newspaper articles included letters home and gave a more intimate look at the soldiers. It gave them personality.
“They are much more than names,” said Smith.Photos, letters, gravesites and other interesting facts about each soldier are documented in the book.
Smith hopes connecting these stories with the names on the tower will help inspire Norfolk residents to remember.
“If you tell them who these people are, they will start remembering. They will put a poppy on and remember. They will know what the people of Norfolk went through,” he said.
Smith’s book is being launched on Aug. 10 at 2 p.m. at the Simcoe branch of the Norfolk County Public Library to mark the 100th anniversary of the beginning of the First World War.
A brief presentation will be held on the front lawn of the Simcoe library before a silent walk to the Carillon Tower where a service of remembrance will be held at 3:30 p.m.
A number of other events will be held by community partners throughout the county over the next five years under the title Norfolk Remembers to commemorate the 100th anniversary of the war.
Smith’s book will be available for purchase at all Norfolk County Public Library branches.
Sarah Doktor 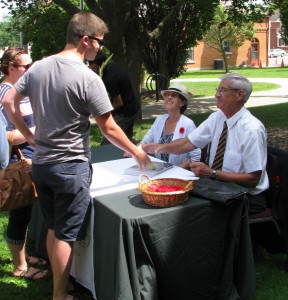